While anything surrounding the Church and the Pope can always be considered controversial, I have found that the wine from the Rhone Valley in France, particularly the Chateauneuf du Pape, often finds common ground in those who love wine. And even with those who don’t know they love it.  (I also really enjoy a Cote du Rhone wine, but that is for another post).

“The Pope’s New Castle” wine was named for Pope Clement V, former Archbishop of Bordeaux who relocated the papacy to the cit of Avignon in 1308, and his successor John XXII, who later erected said castle in this region of France where both these religious leaders found God-like qualities in the local wines. (Okay, I’ve taken a writer’s license to embellish here a bit. But not much–the wine IS good). Chateauneuf’s can be a blend of 13 different Rhone varieties, but they are comprised primarily of Grenache, Syrah and include Cinsault and Mourvedre among others.

Just like all popes are not created equal in the eyes of the masses, neither are all Chaeauneuf du Papes, but the one in question for today, Chateau Cabrieres 2010 could make a choir of angels sing its praise.  And of course, I’m angelic, if nothing else. 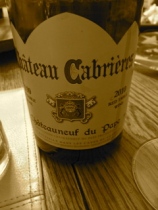 In a word-divine. The wine is a great balance of fruit and complexity with notes of deep cherry and rasberries, softened by flavors of vanilla and deepened by soft, spicy notes of white pepper.  The wine is both elegant and rich at the same time with a nice, long finish, and it is very drinkable on its own or with rich foods, such as turkey, roasted vegetables, and stuffing. (What? I was eating light for the Holidays).

If you’ve ever entered a large cathedral, it can be daunting to take in all the pomp, circumstance, and pagentry of the Catholic tradition–drinking a glass of this is like finding a seat in a small, aloof alcove underneath a stained glass window where the light shines down directly in front of you. It is quiet here, but charged with a serene energy. This wine feels like this for me.

I was eager to try this one out, but in hindsight after the second glass, believed this wine would have been even better by opening the bottle sooner and letting it “breathe” or by decanting it.  A 2010 wine, this is still a young wine with a good amount of tannin in it, so you can drink it now or save it a bit to enjoy in a year or two.  Be good and give as a gift, or selfish and enjoy the whole bottle yourself.  Definitely a wine for the time and ages. And angels.